I’ll fast-forward past the travel to Sonoma, with the exception of referencing the kid on the car rental shuttle in Oakland who made a comment (to someone else) about Houston being the devil’s armpit. I gave a silent chuckle because I know some folks that would appreciate that remark.

Upon arrival at the Fairmont Sonoma Mission Inn, I promptly shifted into relaxation mode. A quick stop at the pool, enjoying the 80 degree weather and sunshine prior to a brilliant dinner at the girl & the fig. Although that was one of several restaurants recommended to me, I think that a small part of me chose it because I sometimes love the absence of capitalization – I’ve always liked e.e. cummings, whose full name – Edward Estlin Cummings – isn’t nearly as interesting when spelled out “properly.” I also often sign my name in lower case and always have. I also have an unhealthy relationship with using dashes and ellipses, which you’ve picked up on if you’ve ever received an email from me or read my writing.

the girl & the fig was delightful. I wasn’t quite sure what to expect about the dining ambiance in Sonoma, other than it had been described to me as quaint and more laid back than Napa. I was pleasantly surprised to find that much of the seating was outside. I had a couple of fig/blueberry vodka/ginger simple syrup concoctions, a fig/arugula/goat cheese/pancetta salad and chicken paillard for dinner. I tend to judge restaurants by their bread – a restaurant with good bread is often good; a restaurant with uninspired bread tends to be mediocre. the girl and the fig had mediocre bread, but the food turned out to be quite good. After dinner, I caught The Kids are All Right at the Sebastiani Theater, a charming single screen theater in the heart of Sonoma that sells popcorn and sodas in sizes that Morgan Spurlock wouldn’t be horrified by (ie extra small by today’s standards).

After rising early and starting the day with a latte as I always do, I went to experience the resort’s bathing ritual. How could you possibly justify not starting your day with a bathing ritual if it was made available to you?? A sequence of four cold, warm and hot mineral showers and baths, followed by a eucalyptus-infused sweltering steam room and toasty sauna left me feeling more refreshed than I have in a long time. I pondered how I could add a mineral bath house, or sauna at the very least, to my home. Who needs a kitchen anyhow?

I took a drive over to Napa quite early and arrived at the Trefethen family vineyard. I ended up with a private tour led by a man named Chino who told me that he’d walk around with me for 15 minutes. He must have liked me, because he spent about 45 minutes with me – explaining the ins and outs of grapes, the riverbed, showing me into the barrel room (explained toast and its effects), opening up the old wooden door leading to a killer view and answering all of my questions. I got turned on to Trefethen about 12 years ago and tasted a few of their wines – the Dry Riesling, the Cabernet Franc and the Cabernet Sauvignon. The Cabernet Franc was my favorite, though I’ve always been a fan of the Sauvignon. I was incredibly tempted to pick up a bottle of the Trefethen Cabernet chocolate sauce, but didn’t want to deal with checking luggage. I’m sure that I can find it online…

After tasting a bit of wine, I drove to downtown Napa — it seemed quirkier than Sonoma. One of the first things I saw was Ubuntu restaurant, or more specifically a restaurant and yoga studio. Quirky. Many of the streets were closed off due to a parade, so the vibe was likely quite different than on a normal day. The streets were full of men that likely labor in the vineyards. Wearing their stretchy black Wrangler pants, cowboy hats and ropers, along with their little mini-me sons, my sense is that this wasn’t the normal Napa crowd. There were more PIBs in Napa than in Sonoma – people in black, a phrase I stole from a cab driver in Park City during the Sundance film festival – but nothing drastic.

On the drive back to Sonoma I spotted a sign in front of a church – had to document it. Warning: if the devil can’t make you bad, he’ll make you busy. I must be pretty darn good, because I’m pretty darn busy.

A quick pit stop at the Basque Boulangerie yielded a brie and prosciutto sandwich which I took to the square. It’s hard to beat sitting in the sun with a loaf of bread covered in rich, creamy brie (though having Murph there with his head cocked, listening and watching the birds, could have made it a little more delightful). I love language and for some reason found it amusing that the boulangerie had four slots – two for plastic forks and plastic spoons, and two for real forks and real spoons. This is common vernacular, but I still thought it was amusing when the items were next to each other. Plastic is the opposite of real, both in cutlery and in bodies found in Southern California.

Back to the hotel for a shiatsu massage. I find it hard to relax, but I had at least three separate moments of true blissful relaxation – not quite falling asleep, but at the point when my mind was clear. Heavenly, though I probably won’t go with shiatsu again. The pressure from thumbs is just, well, a little odd. My favorite remains the hot stone massage which has the benefits of a deep tissue massage without the associated pain. Regardless, a massage is a massage and who am I to complain.

I decided that it was time for a little more wine (why not!) and drove to the tiny town of Kenwood. I went to the Mayo Family Winery Reserve Room and sampled some Zinfandels and a Port. My favorites were the 2007 Mayo Zinfandel Port, Ricci Vineyard and the 2007 Mayo Zinfandel, Los Chamizal Vineyard. They only sell about 6,000 cases a year, and Paul, who was incredibly gracious (he refused to charge me because I was asking for very light pours), told me that 99% is sold via their two tasting rooms. The wine is not distributed, so the only way to get it is in Sonoma or via their web site.

Next up was a quick stroll and dinner. I saw a small sign that said “what would you do if you knew you could not fail?” That’s among the more interesting questions I’ve seen, and will keep it in my repertoire for getting to know people. My answer is probably becoming a photographer. There’s just something about capturing a single moment in time through the a viewfinder (even with digital, I just can’t tear myself away from looking through it – using a full digital screen just seems so much less beautiful and artistic…).

El Dorado Kitchen was on my short list and it did not disappoint. I had the house made chiccaron, which although was probably incredibly unhealthy, was quite tasty. I followed it up with the red wine braised beef pave with horseradish creme fraiche, which was impeccable. It truly melted in my mouth.

Overall, it’s been a hedonistic couple of days. Still more to go…

A simple, short day consisting of a lovely drive along Napa’s Silverado trail. How I would have loved to have had my own little car, top down, practically designed for roaring through the winding roads between the abundant and glorious vines. Driving slowly to avoid the overly enthusiastic cops in Sonoma and Napa, in a rented Chevy Malibu sedan, just isn’t the same…

I didn’t bring my digital SLR, so just some iphone photos below: 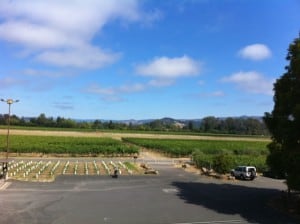 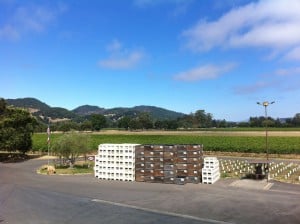 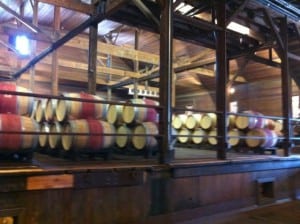 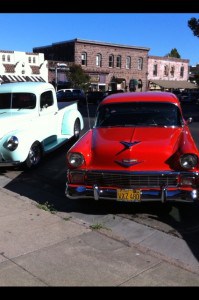 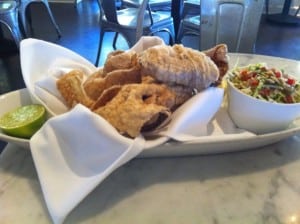